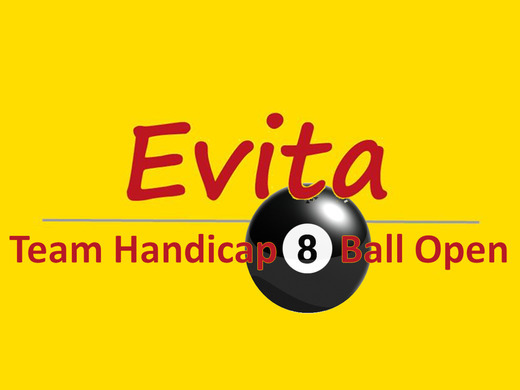 On Saturday 21st November, Evita Bar will be hosting a Scotch Doubles Handicap 8-Ball Tournament. This will be open to all players from the Saigon Pool League, regardless of which division you play in. It will be a handicap tournament meaning that every pair has an equal chance of winning. The tournament will use the points system developed by the SPL for the Fargo Divisions.

1. On arrival the doubles pair should report to the scoredesk so they can be registered, and given their joint handicap. They will then be asked to find a free table to play on. The pair should play together as a pair for the entire evening.
2. Each of the four tables will be 'winner stays on'. All breaks will be lagged for.
3. The pair who loses move on (in a clockwise direction) to put their names on the waiting list for the next table.
4. If a pair win 4 consecutive frames they also have to move on.
5. All frame results should be recorded on the whiteboard.
6. The Fargo Team points system developed by the SPL will be used meaning the tournament is a Handicapped Tournament.
7. The handicap given to each pair will be the average of their individual SPL handicaps.
8. Every frame has 100 points on the table, with the winning pair 'stealing points' from the losing pair. Beating a higher rated pair results in more points 'stolen'. Beating a lower ranked pair means you steal fewer points (but you still gain points from them).
9. The winning pair will be the pair with the Highest average points per frame at the 'cut-off' point of 11pm. Any frames started before 11pm will be allowed to be completed and will count towards the competition. Frames started after this will not count.
10. Only pairs who play at least 8 frames will qualify for the prizes.

The competition has no official start time (all frames will count from 6pm) but turning up too late means that a pairing is unlikely to be able to complete the minimum 8 frames (see rule 10).

I will try to display the latest scores on the screens in Evita.

Evita has kindly agreed the following: