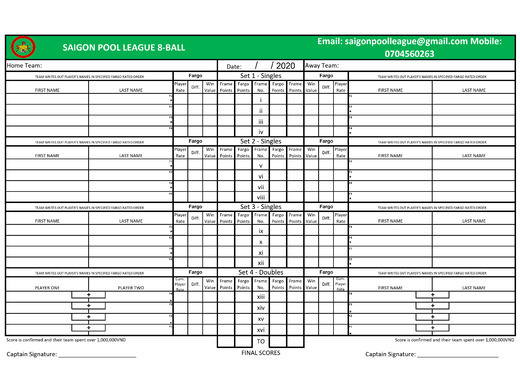 Season 2 of 2020 sees some new changes to the Saigon Pool League format, but 2 TROPHIES for every team to play for!

Thank you for stepping up for a new season. It will undoubtedly test us with the odd challenge or two, but with your support and flexibility, I'm sure we'll see it through.

As most of you will know, I have been looking at the Fargo Rate Handicap system over the past year. It has many advantages, producing balanced and fair match outcomes in matches with a broad range of skills. It has proved very popular in the weekly Buddha Bar Fargo Tournaments, ensuring a variety of winners, instead of the usual finalists, which quickly reduce support for regularly held tournaments.

Joining the Fargo Rate system requires some structure before application, so I have been working on developing a directory of Player Starter Ratings, which is a requirement of joining Fargo Rate. Fortunately, I have had access to over 250,000 data points, from our matches over the last 13 seasons and that has enabled me to put together a baseline for every historic player, so that we can now start to exercise and explore.

I also know that some players are not open to change (why try and fix something that isn't broke) so I have developed a dual-format competition for this season. It will follow the format of previous seasons and provide the same league structure and match play format as our regular Saigon Pool League setup, but we will also run a Saigon Pool League Handicap League as well. Both will have trophies up for grabs, so nobody is losing out.

The new season will come with a little more detail though, to support the dual format. An e-directory of player Fargo Rate handicaps will be released prior to the season, as well as a new Match Sheet. The website will also be updated with player's latest handicaps.

The general rule of thumb is that a 50% Win/Loss Record in the Premiership is a 450 Fargo Rate, in the Championship it's a 375 Fargo Rate and the Social Division is a 300 Fargo Rate. Players that are 100 Fargo Points apart, should have a win ratio of 2:1 (for every 3 frames played, the high handicap wins 2 frames and the low handicap 1 frame). At 160 points difference, that ratio becomes 3:1. The Fargo Rate difference is not linear.

NEW PLAYERS
New Players this season will have a starter rate equal to their Division 50% player average unless they are pre-registered with the League before match night. (e.g. If they join a Championship Team on the night, they will be rated at 375). After 5 matches, all Fargo Rates will be updated, as they will be after 10 matches. NEW PLAYERS will have their PREVIOUS MATCH RESULTS REVIEWED after both 5 matches and 10 matches. Therefore, it will be to a Captain's benefit, to be honest with the League during the registration process, and provide an honest estimate of a player's ability. For example, if a player is joining a Championship side, but they are a Premiership level player, there will be no advantage in registering them as a 375 Fargo Rate because the review process will downgrade their handicap results during the review process. Similarly, a lower-rated player will be disadvantaged under the new play format, so pre-registration will be advised.

FORMAT CHANGES
The best format for playing these matches would be for players of similar skill to be playing each other. A new format was proposed at a Captain's Meeting on 29th August 2020, that supported this ideal, but was rejected by the Captains present, as they felt it was too complicated. The Captains agreed to retain the random selection method used over the previous 4 seasons, so this will be the selection format we will use this season.

POINTS
As in previous seasons, the match will be based on 12 Singles Frames and 4 Doubles Frames, with each frame in the Standard League carrying 1 point for the win, 0 for the loss. The winning TEAM will receive 3 points towards their League Standing, 1 point for a Draw and zero points for a loss.

However, we will also be recording a Fargo Value for each win. This will be entered into an entirely separate Division called the Fargo Division (Premiership/Championship/Social Division). Each frame in this format is worth a share of 100 points, with the size of that share decided by the difference between the two player's Faro Rates. For example, if Player A has a Fargo Rate of 440 and Player B has a Fargo Rate of 370, then the difference between the two players is 70 Fargo Points. That difference creates a Winning Points Value and a Losing Points Value, but the two values given to each player in that frame, always add up to 100 points. This is explained in detail in this accompanying Saigon Pool League article here.

For Doubles, the Fargo Rates of the 2 players playing together are added together, then halved. Same with the opposition pairing. The difference between the two Fargo Rates determines the win value for the Doubles as well.

If players are playing in an appropriate Division, against other accurately Fargo Rated players, their average Fargo Points should be around 50pts. If it is higher that 50 points, this would indicate that a player's handicap is too low. If their average is below 50pts, it would indicate that their handicap is too high. It is planned to review every player's handicap after Week 5 and Week 10 and make appropriate corrections.

New Scorebooks are available from the website's 'Downloads' section. There is also an up-to-date Player Directory for each Division, with all the relevant player Fargo Starter Handicaps listed. There is also an e-Smart Excel Spreadsheet available in the downloads. This can be manually filled in on the the night for an up-to-date Fargo score, or can be filled in post-match, by copy and pasting the results entered into the website for the win-Loss format of the match, into the e-Smart Calculator.

On match nights there will be 2 match sheets to add on the Scoring App. If Captains can at least fill in 1, that would be appreciated. If you can just enter your player line-up into the Fargo Ranked match, the League can easily enter the Fargo Values for each match afterwards. The regular division will continue to be tick boxes as usual. If you do not have a LeagueRepublic log-in, please let us know as soon as possible.