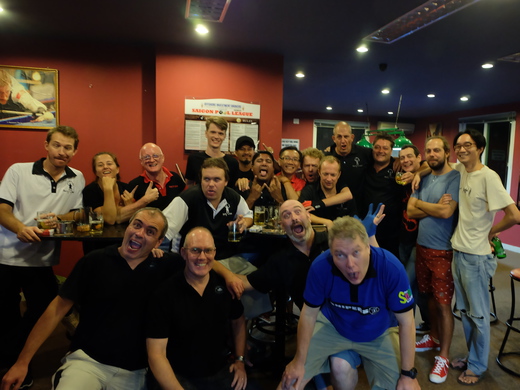 Saigon Pool League enters its ninth season with an exciting mix of teams, old and new, which includes the Premiership return of a re-grouped Hustler Team and a localised Championship set-up. So with Former World Snooker Champion, Ken Doughty, set to be attending our June Presentation Night, we have a very exciting season ahead.

Once again we have Offshore Investment Brokers (OIB) to thank for the Ken Doughty sponsorship, after their support in bringing Phaa Hmaunpoa to our 2017 End of Season Presentation Night at The White House in District 2, which was again hugely supported, as three Cup competitions were decided on the night, plus a chance to play off again Phaa in a game of Super Killer.

Craig McAvinue from OIB, stated a clear intention for his company to continue to support this year's Saigon Pool League.

There is a continuing reminder that the Saigon Pool League is 'a beer league', with the emphasis on selecting a team where drinking beer and having fun are the centre of our Pool Nights, before choosing a suitable transport method home.

Our Bar Agreement has penalties for late cancellation and forfeiture of matches, as per last season, so please look at them thoroughly.

New Rules Boards will be issued very soon. I personally can't wait to get underway.