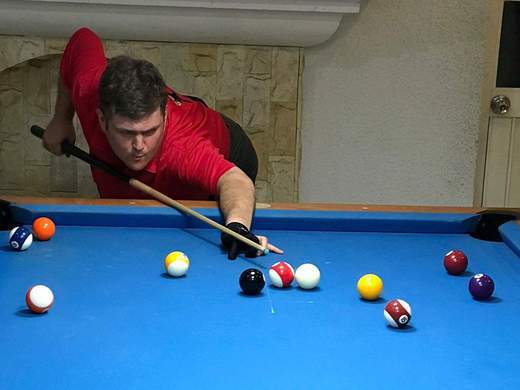 All to play for all to gain

The Saigon Pool League has seen some changes this season, with two venues closing and two others withdrawing from the League. But for a thriving Pool League like ours, it’s been an opportunity and we’ve seen teams move into new venues and create new and exciting teams. So much so that the strength of the teams created the need to revise the Divisions.

The return of Thu’s Bar in their new District 7 venue 2Bar, plus the move of Premiership Champions Masse Sharkz, to O’Brien’s in District 1, meant that we saw the Premiership become a tough field for any newcomers to tackle. The White House Geckos took the opportunity after their Championship Trophy win last season, but the Orient Outlaws wisely declined the opportunity as Championship Runners-Up, allowing a strengthened Dailo’s Dragons team to retain their Premiership place, a decision which has not been wasted.

The Top 4 are currently separated by just 3 points after 6 matches, with all four having suffered at least one defeat. Masse (Badboyz) lead the pack, just a point ahead of 2Bar. These teams look set to be the ones to beat this season, but tied for third on 10pts are O’Brien’s Sharkz and the revitalised Dailos Dragons, who still have a game in hand.

O’Brien’s beat Dailos, but lost against 2Bar, forfeit against Masse and drew against the Orient Oddballs. They will certainly have to find more consistency against the Top 4 to retain their title this season. The Dragon’s outstanding match is against fifth placed Orient Oddballs, who could join the mix should they get the better of Dailo’s Dragons in their first head-to-head of the season. The Oddballs have had a positive start to the season with just the one defeat against the Sharkz after being forced into a draw against a much weaker Sharkz side at the beginning of the season. They are yet to be tested by the other Top 4 teams though, only then will it show whether they have the capabilities of challenging for a top place.

The bottom three are a mixed bag that can upset any of the Top 4 with a decent rub of the table. The White House Geckos started the season in positive form but have found the harsh realities of Premiership membership in their last two matches with drubbings from both the Dragons and fellow relegation zone occupants, Buddha Bar. The White House Desperados are the only 8-Ball team in the League yet to score a point, although on paper they are a very capable squad. They are short on numbers and short on results at the moment and will need to find some grit to deliver a change around to their season. As mentioned, Buddha Bar also find themselves in the relegation zone having had just a draw to their name against an early season Dragons squad, until it all came together against the Geckos last week. Hopefully they’ll take some of that confidence into their upcoming matches as they face four teams that have already beaten them this season, with only the helpless Desperados laying open to them in the next 5 matches.

One thing is for sure, there will be no easy matches for any team in the Premiership this season.

The Championship Divisions are proving to be a very competitive playing field with 12 teams split provisionally into two geographically separate areas. Whilst the centrally located teams in District 1 may favour their pre-playoff geographic status, all teams will be faced with away journeys into District 5, District 7 or District 2 at peak travel times, such is the challenge of moving around this city at 6.30pm. If you’re the home team, then that may be an advantage, but equally a well organised team may find an extra special bond, in taking that journey together.

Masse are always going to have a pick of the crop at any level and if there had been room in the Premiership, then Masse M&M’s may well have started their campaign in that cauldron instead. But there wasn’t and as a new team, at least they didn’t end up in the Social Division. They certainly have Premiership quality about them, with a number of Saigon Legends opting for lower division play, rather than testing themselves at Premiership level. They haven’t had it all their own way though as they’ve had to rescue draws at both bottom placed Orient Outlaws and third placed Dailo’s Too. Only The Commoners can catch them now, with a win of their outstanding match and defeat of the M&M’s when they go head to head this Thursday. It’s unlikely, and it’s almost a guarantee that Masse will enter the playoffs with a near maximum total if they can’t be stopped.

Second and third spot are less defined, with four points covering the bottom 5 teams. Season 1 Championship Runner’s-Up, Orient Outlaws, languishing in bottom spot but with a game in hand, will be seeking a better second half to their season after heavy defeats against the two teams above them, namely the Drunken Duck and The Motley Cue (formerly Emergency Room Invalids). All three have opportunities to push into the playoff places, but wins are becoming the deciding factor, rather than the draws that have dominated particularly the Ducks campaign this season. They will know that wins against The Commoners and third placed Dailos Too, will be paramount in achieving playoff status. Similarly, The Motley Cue have an opportunity to make the playoffs if they can take points off either The Commoners or Masse M&M’s, as well as the Outlaws and Ducks that surround them.

The run in to the regular season is going to be a very keenly fought affair.

Logistically, this is probably the toughest Division, with three District 2/District 7 journeys involved in the regular 10 match season for every team, but it could be worse – you could be Tavern Thieves with 5 trips to District 2 in the Social Division, or T-Rex with 5 trips to District 2 for 9-Ball – that is different (apparently). Either way teams have been facing up to the challenge and some great matches have gone ahead.

Noi-Z (formerly OMB!) have been the dominant team so far with the only other unbeaten record in the Saigon Pool League. Already 5 points ahead with a match in hand, there looks very little that is going to stop the Noi-Z team being in the playoffs and challenging for a Championship Trophy at the end of the season.

Like the Championship Central and West Division though, the other 5 teams are only separated by just 3 points with the bottomed placed team, The Tavern Assassins, having a match in hand, albeit against the Division leaders but of whom they took their first points of the season. The Assassins have also played all their matches on the road, so their last 5 matches will all be in District 7 ensuring that this former Premiership team will be pressing for a top 3 place at the end.

The Buddha Elites have also come into form recently, pressing the former Slackers, now playing out of Pitchers Bar & Grill as Pitcher’s Nine-Seven for second place. With head-to-head results even, only frame difference separates them at the moment.

The Speakeasy Gigolos started the season strong but have suffered some heavy defeats recently, although they did put a scare on the Buddha Elites last week. They’ll be hoping to finish on a positive note as they sit just one point away from the playoff zone.

Liver Failure have been struggling for players this season, but with just two wins from six matches they are still only 2 points away from the promotion playoffs. Hopefully they will have a solid run-in and get in a good position for the playoffs. With their venue under refurbishment, it will be a great way to reward the new owner.

Nothing certain. Nothing set. The run-in will be a test of who wants it most.

The Social Division this season is probably the most unpredictable. There were quite a few changes in the closed season with a new team and some consolidations. Three teams have had positive starts. Flow Riders, who were last season’s Social League Champions, sit in third place, topped by two teams that were one last season as The Hardened Arteries, such was their potential. Of the two, The Flowters, also playing out of Flow Bar, are leading the table, followed closely by the rest of their fellow former teammates who have formed The White House Impeachments. They have a game in hand.

They all sit comfortably apart from four teams, separated by just 1 point, that include Bread & Butter, a consolidated Tavern Social Team as well as the Casba Kickers and a consolidated Evita team. They will no doubt have fun fighting it out for the mid-table places over the rest of the season.

Bringing up the rear is the continually spirited team of The First Ladies. They have earned their first point of the season and with their growing confidence, you know it won’t be their last.

Other than Carom, 9-Ball Pool is a favourite with the local Vietnamese Pool community and garners more interest than 8-Ball in many of the BIDAs. But for the Saigon Pool League, 9-Ball is the occasional, the variation of the game that we play on a Monday for a bit of fun. So the skill levels of this Division’s teams can vary depending on the composition of the teams, whether they’re born out of Premiership 8-Ball Teams, or out of Championship or Social Division teams, or are a mix of all three. In particular the number of Vietnamese players in the team can alter the balance of the teams as well as the important spend behind the bar. As such it’s probably the hardest League to find a fair and enjoyable formula.

Samlo, a predominant mixture of players from the Dailos Premiership side, currently lead this Division on frame difference, after a draw against second placed The Buddhas, plus a fortuitous 16-0 forfeit gained from the new Universal Hotshots team. The Buddhas will no doubt be chasing the Samlo team for most of the season, although they now have to watch their rear, as T-Rex have returned from their new District 7 home at 2Bar.

T-Rex are a 100% Premiership side, only shackled by the challenge of travelling from their District 7 lair to the far-off shores of District 2 on five occasions during the season. It does play back into their hands though as it is a reluctant journey for other sides to take just the once. Their commitment to being involved with the Monday Night 9-Ball Pool League shows they plan to be serious contenders at the end of the season.

The Cave Dwellers and the Hotshots have had a difficult start to the season, both struggling to get steady numbers for their Monday night Pool obligations. But they can produce great teams on their night. They will be in the mid-table mix this season, I’m sure.

Surprisingly, the Evita Sixty-Niners lay at the bottom of the table at the moment, however Evita should never be underestimated, as they’re a very capable squad. While there’s an Evita in the OIB Monday Night 9-Ball League it will continue to be fun!

Saigon Pool League continues to be the quality Pool League in Saigon. Good Luck to all this season.