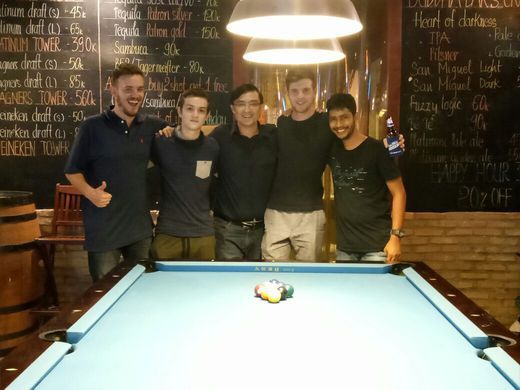 Week 8 Report - While the Premiership Title Chasers are set, the Championship is Much Closer

Masse and 2Bar look set for a Premiership title fight, but the Championship Playoff Groups are a lot closer as the Tavern Assassins launch themselves into the mix.

The OIB sponsored Saigon Pool League enters the back half of the season, as it returns after a two week break. While the Premiership and Social Divisions are on their home straight, the Championship Regular Season is just two matches away from the playoffs.

Although 6 matches remain in the Premiership, it currently seems that the Premiership title is now a two horse race between Masse and 2Bar, separated by just 1 point with the last match of the season set to be their final head to head. They have both suffered losses this season though, proving that on their night, any Premiership team is capable of beating the top sides as well, but they enjoy a 5 point gap between them and third place, as the mid-table teams have struggled to find consistency in this mix of heavy weights.

Dailos Dragons have been the latest victims of irregular form as the Orient Oddballs took 3 points off them in a rearranged mid-season fixture. The Dragons, now on back to back losses, face League leaders Masse this week, so they will want to reignite their charge with a top team upset. The O'Brien's Sharkz share the same points as The Dragons but will have to show that the Pool is more important than the politics if they want to contend for a top 2 place this season. They face bottom placed Buddha Bar this week before Masse and 2 Bar in back to back weeks. The whole league is hoping they will play their full part in deciding the top places this season.

2Bar have the out of form Geckos, who have crumbled since their first three opening fixtures saw them unbeaten, including a win against 2Bar and draw against Masse. Their 14-2 drubbing by Buddha Bar in Week 6 was a low point with closer defeats at Masse and O'Brien's showing that they're not done yet. After their mid-season break they will be hoping to claw their way out of relegation torment. 2Bar would be a road back, plus a juicy 6 point, back to back match prospect, facing home rivals The White Hose Desperados in Week 9.

The Championship Playoffs are taking shape with Noi-Z from the Championship South & East and Masse M&M's from Championship Central & West already assured of a Championship Super 6 Playoff place. However the South & East Playoff Division is tightly set with just 2 matches to go. Buddha Bar Elites, Tavern Assassins and Pitchers Nine-Seven all have 11 points with the Pitcher's team just out of the Super 6 places on frame difference. The Nine-Seven have the toughest run-in with a match against Noi-Z, but they also have to play The Elites where a win would see them top them, if just those two are drawn on the same points at the end of the Regular Season. Liver Failure is just a point behind those three so have their own chances for a Super 6 spot if they can beat The Elites and the Assassins.

The Assassins have seen a remarkable comeback, taking 4 points off Noi-Z to bring themselves back into contention. They just need to confirm their inclusion in the Super 6 by beating The Gigolos and Liver Failure. Liver Failure may be happy with draws to the Assassins and Nine-Seven to avoid a Super 6 playoff and maximum advantage in the Championship Survivors Cup, but such is the fine balance of the South & East Division that teams are probably just better off playing their game and seeing how the pieces fall, as the Gigolos and Liver Failure are all within Super 6 contention if they could finish with straight wins.

In the Central & West Division, Masse M&M's have surely secured top spot with 2 matches to go, as they now only face the lowly Outlaws and The Motley Cue, a team which would probably be very happy to enter the Survivor's Cup this season in top spot, although wins against both the Commoners and Masse M&M's would also see them enter the Super 6 in a strong position.

The Commoners are continually strengthening, looking more and more like a Hustler-esk side of the past. They desperately need a win against Dailos Too to enter the Super 6 in contention. Dailos Too are also in a similar spot so the Week 10 match may prove to be a Championship promotion decider.

Both the Drunken Duck and The Orient Outlaws need a win in their final match of the regular season as results against The Commoners and Masse M&M's are unlikely to affect their Survivor's Cup positions, but their head to head points will. The Outlaws went down 11-5 at The Duck and without stalwart Mick Gibbs, who is on holiday, it could be a Wooden Spoon spot and relegation to the Social League next season if they can't join the Survivor's Cup with a point. The Ducks would love to enter the Survivor's Cup in top spot and 8 points. A win against the Outlaws would guarantee that.

Both the Super 6 Championship Playoff and the Survivor's Cup look set to be an interesting race to the finish.

The Social Division season resumes with a top of the table home derby, as The Flow Riders play the Flowters, who lead the Division. The Flowters took the honours in their first meeting and the Flow Riders know that they will have to take all the points if they are to stand a chance in finishing once again in the Top 2 this season.

The White House Impeachments will be hoping that the Flow Bar teams draw as The Impeachments face bottom placed First Ladies in a second derby at The White House. The Impeachments continue to improve and their self belief may just be enough to carry them over the line when they face the Flowters for a second time in 2 weeks time. If they're level on points at that time, they may well feel that they have a chance of winning the match and the Division. The Impeachments will enjoy four home matches in the final six as a bonus and if the Flow Riders are out of the equation, it will just be a matter of keeping their composure and forgetting about any table gremlins on the run-in.

Mid-table, the Butter Balls continue to show their commitment and to strengthen their squad. If any team is likely to upset the top 3 at the moment, it will be the team from Bread & Butter. Back to back fixtures against the Flow Bar teams will either energize their season, or finish it. Either way, all eyes will be on their Week 9 and Week 10 fixtures.

The Casba Kickers, Tavern Thieves and Evita Pho Queue head the bottom half of the table and will no doubt have fun sorting out the finishing order down there and let's not forget about the First Ladies. They are due a win, sometime very soon.

The Monday Night 9-Ball League has been a bit of a mixture of successes this season with the usual suspects dominating the top three places but the others proving that they can pull the odd surprise. Samlo and The Buddhas are tied for top place after their thrilling 21-21 draw, with T-Rex just a point behind. The Universal Hotshots have been the new side to watch....if they're able to get a side together. Two wins and two forfeits tarnishing their place in the table.

The other District 2 teams continue to play their part, providing some of the fun 9-Ball Pool, among the beer and banter, that these teams provide in spades. Only 6 matches so plenty of Monday Night Pool still to be had.